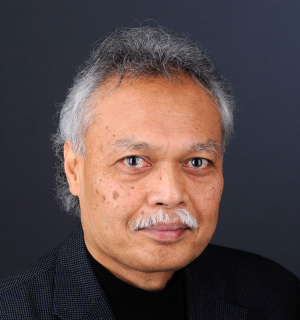 Dr. Siahaan is a Professor and Associate Chair of the Department of Pharmaceutical Chemistry, The University of Kansas. Dr. Siahaan was originally from Indonesia; he earned his Ph.D. degree in Organic Chemistry from the University of Arizona in 1986. He did postdoctoral research at UC Santa Barbara in the area of total synthesis of an antibiotic with the cyclic peptide alkaloid structure. He then moved to La Jolla Cancer Research Foundation (currently Burnham Institute, 1987–1989), working on designing cyclic RGD peptides to inhibit cell adhesion during tumor metastasis and thrombosis. Following that, he joined Sterling Winthrop Pharmaceutical Company (1989–1991) to work on developing peptidomimetics to inhibit matrix metalloprotease enzymes for suppressing tumor metastasis and rheumatoid arthritis. In 1991, he joined the Department of Pharmaceutical Chemistry at The University of Kansas as an Assistant Professor and moved up through the ranks to Full Professor in 2002.

Dr. Siahaan is a Fellow of the American Association of Pharmaceutical Scientists (AAPS). He received the Lila and Madison Self and Pfizer fellowships from The University of Kansas. He is currently the Program Director/Principal Investigator of the NIH Biotechnology Training Program at The University of Kansas supported by the National Institutes of General Medicines (NIGMS). The Biotechnology Training Program is aimed at training predoctoral students to work in the development of therapeutic agents and vaccines such as peptides, proteins, and oligonucleotides derived from biotechnology research. He is currently serving as a member of the Executive Committee of the School of Pharmacy at KU, Executive Board of Directors of Globalization Pharmaceutical Education Network (GPEN), and Chair of Conflict of Interest Committee at KU. He has served on various study sections to review grants for the National Institutes of Health, Department of Defense, and Alzheimer’s Association. He serves as a member the editorial boards of various journals, including Journal of Pharmaceutical Sciences, Medicinal Research Reviews, Antibody Technology Journal, Open Medicinal Chemistry, and Makara (an Indonesian scientific journal).

Dr. Siahaan has published 170 papers and 11 patents; he has presented oral and poster presentations at national and international scientific meetings as well as academic institutions. His research projects have been supported by the National Institutes of Health (NIH), PhRMA Foundation, Alzheimer’s Association, American Heart Association, Arthritis Foundation, National Multiple Sclerosis Society, Juvenile Diabetes Research Foundation, and various companies (e.g., Hitsamitsu Pharmaceutical Company, Alnara, Inc., and Edenspace, Inc.). His research is focused on the utilization and modulation of cell adhesion molecules on the cell surface for enhancing drug permeation through biological barriers such as the intestinal mucosa and blood-brain barrier (BBB) and for targeted drug delivery to immune cells to treat autoimmune diseases. For the first project, Dr. Siahaan’s group uses cadherin peptides to modulate cell-cell adhesion proteins to enhance permeation of small and large molecules, (i.e., peptides, proteins, oligonucleotides) through the BBB and intestinal mucosa. Recently, cadherin peptides have been shown to enhance brain delivery of marker molecules and anticancer drugs that are recognized by the efflux pumps. For the second project, his group is also using peptides derived from cell adhesion molecules (i.e., ICAM-1 and LFA-1) to target drugs to leukocytes and vascular endothelial cells to control autoimmune diseases (i.e., rheumatoid arthritis, type-1 diabetes, and multiple sclerosis). In the past 10 years, his group has utilized cell adhesion peptides/proteins to target antigenic peptides (i.e., bi-functional peptide inhibitor (BPI) and I-domain antigen conjugate (IDAC)) to block the formation of the immunological synapse at the interface between T cells and antigen-presenting cells (APC); the inhibition of immunological synapse formation is proposed to alter the differentiation of T cells from inflammatory to suppressor/regulatory phenotypes. Recently, his group has shown that BPI and IDAC molecules can be delivered as vaccines to suppress autoimmune disease in experimental autoimmune encephalomyelitis (EAE) in the mouse model.

Over the past 22 years, Dr. Siahaan has mentored numerous undergraduate students, graduate students, postdoctoral fellows, and visiting scholars. These students and scholars are currently working in pharmaceutical industries, academia, and government research institutes. He is also interested in and actively participates in recruiting and enhancing the number of underrepresented graduate students to the graduate programs, specifically in the School of Pharmacy and to KU in general. In the past ten years, Dr. Siahaan has also helped to train Indonesian scientists by having them do research in his laboratory at The University of Kansas; this program is accomplished through joint mentorship with universities in Indonesia to increase the level of scientific capabilities of Indonesian scientists to perform research. The joint mentorship program with Indonesian universities has produced three students with Ph.D.s and one student with a Masters degree. Dr. Siahaan also trained several visiting scientists from Indonesia who are now working at universities in Indonesia.