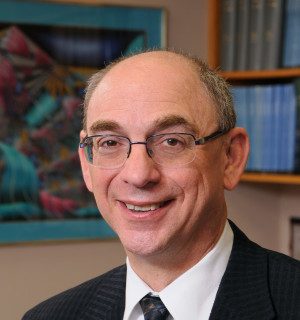 Dr. Ratain served as the first chair of the Steering Committee of the National Institutes of Health Pharmacogenetics Research Network, as well as one of the first co-chairs of the National Cancer Institute Investigational Drug Steering Committee.  He currently serves as co-chair of the IDSC Clinical Trials Design Task Force and is co-Editor of Pharmacogenetics and Genomics, and is a past Associate Editor of the Journal of Clinical Oncology. Dr. Ratain has been extremely active in the American Society for Clinical Pharmacology and Therapeutics. He was in a leadership role in the Hematologic and Neoplastic Diseases Section from 1988-2007 (Vice Chair, 1988-1992; Chair, 1992-1995) and was also involved with the Scientific Program Committee from 1993-2004 including serving as Vice Chair (2001-2002), Chair (2002-2003), and Immediate Past Chair (2003-2004). In addition, Dr. Ratain has served on the External Scientific Advisory Committees at such prestigious institutions as the Georgetown University, Lombardi Cancer Center (2002-2011) and the Thomas Jefferson University, Kimmel Cancer Center (2009-2013). He currently serves on the St. Jude Children’s Research Hospital External Advisory Board (he has served since 2005).

Dr. Ratain is an international leader in phase I clinical trials, pharmacogenetics, and clinical trial methodology with 272 original publications. His research focuses on the development of new oncology drugs, and developing diagnostic tests in order to create individualized anticancer therapies based on each person’s genetic makeup.  He has demonstrated the critical importance of genetic variants in determining variability in the pharmacogenetics and toxicity of certain anticancer drugs and his research has become a model for understanding variability in response to newer targeted drugs.  Dr. Ratain and colleagues research uncovered the molecular mechanisms of toxicity of the topoisomerase 1 inhibitor irinotecan. This led to the ability to predict which cancer patients were predisposed to severe toxicity upon irinotecan treatment. This seminal work led to an FDA-approved label revision of irinotecan to include a warning and recommendation for such patients to be treated with a reduced starting dose of irinotecan.  In addition, Dr. Ratain developed and patented a UGT1A1 genetic test in 2005 (licensed to the Mayo Clinic), which represented the first FDA-approved genetic test used to personalize treatment decisions, available nationwide, enabling clinicians to determine if patients are genetically predisposed to severe toxicity. Dr. Ratain and his team recently conducted a phase I clinical trial of irinotecan in patients with advanced solid tumors to test the feasibility of genotyping patients prior to treatment to determine the optimal drug dose. In one of the first of its kind trials, they showed that a variant in the UGT1A gene can be used to individualize the dosing of irinotecan and illustrated the clinical value of genotype-guided dosing of a chemotherapeutic associated with severe toxicities.

Dr. Ratain along with his colleague, Dr. Peter H. O’Donnell, are charting new territory in preemptive application of pharmacogenomics with “The 1200 Patients Project”. The goal for the project is to analyze whether and how preemptive pharmacogenomic test information might be incorporated into routine clinical treatment decisions. An important future objective is to expand the project to rigorously test the implementation of pharmacogenomic data into standard clinical care, identify barriers to this implementation and devising protocols to overcoming the challenges. The high enrollment rate of patients and physicians suggests that both groups value pharmacogenomics information and want to be a part of its rational use in the clinic. And because many genetic variants are tested simultaneously, and before the patient is prescribed the medications, this project has the potential to impact personalized medicine far beyond cancer treatment.

An Interview with Dr. Ratain

Q: What is your advice for a young investigator planning to pursue an academic career?

A: Find your niche. Ideally, this will be the result of joint mentorship by faculty working in distinct but related areas. My own niche was at the vertex of oncology, clinical pharmacology, and genetics.

Q: Could you put some of your cancer and pharmacogenetics research into layman’s terms?

A: My research focuses on the development of new oncology drugs and developing diagnostic tests to create individualized anticancer therapies based on each person’s genetic makeup.

Q: What do you think can be accomplished with personalized medicine by the 1200 Patients Project?

A: Adverse reactions to medications are one of the leading causes of death in the United States, and many patients take medications that are not effective for them. The Genomic Prescribing System (GPS) is an online portal that allows physicians enrolled in the 1200 Patients Project to access information about how their patients respond to certain medications based on their genetics. Patient-specific results are provided not as raw genetic data but as a patient-tailored synopsis of the information translated into clinical meaning, and they include prescribing recommendations and suggested alternative medications. Ultimately, the GPS enables physicians to make patient-specific treatment decisions, improving patient outcomes.

A: The most rewarding part of my job is having the freedom to be creative.